So, How Long Until The U.S.A. Is Carpet Bombing The Middle East Again?

Why A One Term Trump Could Prove Fatal For The Human Rights Of So Many.

In April 2019 the brutal Islamist regime of President Omar al-Bashir was brought to an end, after a military coup in Sudan. A few days later, a new Constitutional Declaration was signed between a Transitional Military Council and the Forces of Freedom and Change. After three decades of Sharia Law, this opened the door for eleven members of what was termed the Sovereignty Council to install a civilian Prime Minister.

Utterly desperate for change, the people of Sudan had won.

The previous dictatorship had seen several women sentenced to death by stoning. Public whippings carried out by police for the charge of ‘indecency’. As well as both hanging and even crucifixion being legal punishments.

The new Sudanese Constitution though has no mention of Sharia Law. Nor does it mention the crime of Apostasy, the abandonment of Islam, which means the death penalty under Sharia Law. (The best known case of this was of Meriam Yehya Ibrahim Ishag, a pregnant woman, sentenced to be hanged after she married a Christian man in 2014. Fortunately she was able to flee abroad.)

Female Genital Mutilation (F.G.M.) was then criminalised, and the separation of religion and the state soon followed, bringing an end to thirty years of Islamic Law in the country.

Quick to build on the courage of the Sudanese people was one Donald J. Trump, whose executive order to remove Sudan from a U.S. list of state sponsors of terrorism, paved the way for the normalisation of relations with Israel. A country they had been in varying degrees of conflict with since 1948.

This peace deal was not unique though. It was the latest in a series of bilateral deals in the Middle East and North Africa (M.E.N.A. region). Other peace deals included the United Arab Emirates and Bahrain both agreeing to end a state of belligerence between themselves and Israel. Trump and his team headed by his son in law,  Jared Kushner had rejected the conventional wisdom of past administrations, by negotiating and bargaining a way to what many hope will be long lasting peace.

The potential prosperity for the people of Sudan is now enormous with the country now hoping to gain access to billions in aid packages, enabling it to finally tap into its economic potential after so long under a crippling dictatorship.

For all the bombast and bravado, Trump’s approach to the Middle East has been realistic and without illusions. The exact approach that former Secretary of State John Kerry said “would never work”, actually worked. A businessman without ideology who saw the world and international relations in a transactional manner, has most likely brought the Middle East closer to peace than it has ever been in the last 80 years. Hillary Clinton said “you can’t do diplomacy over Twitter”, yet here was Donald Trump. Not staring through binoculars into North Korea from a safe distance, but actually shaking the hand of Chairman Kim Jong Un, and walking across the Korean Demilitarised Zone and into North Korea.

Despite increasing military spending at home, President Trump has been drawing down in existing theatres of conflict across the globe, and is the first President since Ronald Reagan not to start any new wars.

I was shocked in researching this article that over the last one hundred years, the United States has been at war or intervened militarily on forty five separate occasions.

Eight of which were initiated during the eight years of the Barack Obama and Joe Biden administration.

You only have to look at the stock prices of Raytheon, Boeing, G4S and AirScan to see that with a fully compliant establishment figure back in charge; the Military Industrial Complex fully expects to have the U.S.A. back on a war footing very soon.

With that being said, taking his country to war might not be as easy as he would like.As president, Joe Biden will get next to no legislation or justices through because of how well Republican candidates performed away from The White House. Added to that he will have little to no popular support if seventy one million people remain bitter at the way he was elected.

There are some on both sides of the political divide that genuinely believe the soon to be octogenarian is in mental decline, and that he will shortly be relieved of his duties by his running mate, Kamala Harris. Harris was judged to be the furthest to the left of all senators in 2019 by the independent Gov Track Insider. Something that will not bode well for the party at the midterm elections if her failure to get a single delegate in the Democratic Primary is anything to go by.

The 46th President will have two important things on his side though. One is the main stream media, and the second is the Silicon Valley, social media corporations. Neither of which are genuinely interested in democracy, yet hold the power and the wealth enabling them to censor and manipulate millions globally.

Throughout Western societies, the algorithms and the filter bubbles that have played such a huge role in polarisation, are now leading to the dehumanisation of the working classes. Those that do not hold a University degree still have minds of their own. They can think and understand for themselves, yet they are constantly told they don’t know what they are voting for or that they don’t know what’s best for them. 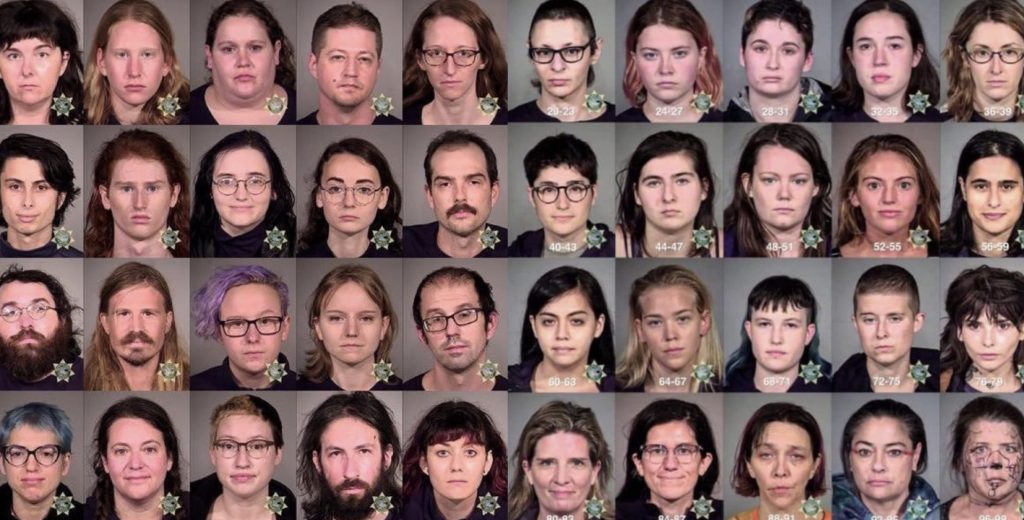 We have a drone class of highly sophisticated people that are $100,000 in debt because they believed obtaining a degree in Intercultural Feminist Dance Theory would really take them places. A class of people happy to remain infantile in how the real world works as they experience a prolonged adolescence. They want an end to child labour in The Congo but the new iPhone they crave needs the child-mined cobalt to facilitate the attention induced dopamine hit they will get from posting selfies on Instagram. They want their friends to coo in envy as they walk across their stained, real wood oak flooring, but they don’t want any trees to be cut down.

Some of these on the far left come known as AntiFa these days. Short for Anti Fascist. The irony is that this group (some pictured above) are anti fascist in the same way that the Democratic Republic of North Korea is democratic. They ain’t. These are the people attempting to poison the mainstream narrative well, whilst simultaneously believing if they don’t get what the world owes them, they have the right to ‘burn it all down’ and destroy the system in revenge.

This patronising class is exactly what leads to your BREXITs and your Donald Trumps. There was something to the idea that Donald Trump was a chemotherapy. And chemotherapy makes a person very sick, but it’s a medicine strong enough to kill a cancer. Even if Joe Biden believes that there is a cancer, he will be so invested and leveraged by the system that he will be unable or unwilling to maintain the sort of backbone required that doesn’t lead to parties of innocent children being blown to bits via drone strikes.

Trump was like that gunslinger in an old Western. The one a town brought in to save them from a corrupt oil baron trying to evict them from their homes so he could mine for gold. Now his work is done he’s leaving town with no thanks, despite them getting everything they wanted.

Tell you the truth no matter how brutal it is? You got it.

Energy independence for the first time in history? You got it.

Deregulation of the economy? You got it.

Record minority employment? You got it.

Record female employment? You got it.

Record youth employment? You got it.

More politically engaged minorities voting Republican? You got it.

A new Middle East? You got it.

Don’t want your kids coming home blown up by IEDs? You got it.

Renegotiate with N.A.T.O? You got it.

You want Iran neutered? You got it.

Stop sending billions of dollars to Iran? You got it.

Confront China? You got it.

So in the future when things get bad again. People might start to ask, where is that gunslinger now… what town is he in? And one of the great things about a good movie is that there’s always someone thinking about a sequel.