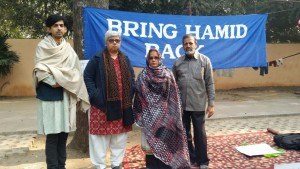 It is now over four years since Hamid Nehal Ansari failed to return from ostensibly, job interview Afghanistan – or at least this is what he told his family.

The reality was that as an active member of Mumbai’s Rotary Club, Hamid was as he naively believed, on a mission to rescue a damsel in distress in Pakistan – in fact it appears, it was a ‘honey trap’ – an entrapment to lure him into Pakistan. The rouse was created by his Face Book friends to persuade him to travel to Pakistan so that they claim their financial bounty in return for an Indian prisoner.

His desperate parents, Mr Nehal Ansari and Professor Ansari now resort to demonstrating peacefully at the ‘Jantar Mantar’ in Delhi in the hope that the Indian and Pakistani authorities will take notice and help them to secure the release and repatriation of Hamid to his  family in India.