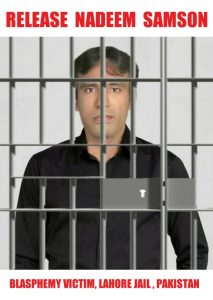 Unfortunately, with increasing prevalence, persecuted minorities in Pakistan are falling victim to fake blasphemy charges over personal grudges and enmity. By way of brief background, the blasphemy laws were initially enacted by the British government during the 1947 partition. At this time, they were merely public order offences and the initial intention underscoring them was to promote harmony between faiths. While these laws were initially introduced by seemingly benign and benevolent design, over the years they have become increasingly Islamised and they are now a chief weapon in the arsenal of those who wish to oppress religious minorities (including the Ahmadi and Christians), specifically Christians.

One of the most poignant and compelling recent cases that is deserving of immediate international attention is the harrowing case of Nadeem Samson. Samson belongs to a Pakistani Christian (Catholic) family comprised of three brothers who were born and grew up in Lahore, Pakistan. On November 24th 2017, following a rather contentious and vexatious property dispute, a violent mob descended on Samson’s house, burning his belongings, subjecting him to extreme physical torture and later coercing a false forced confession out of him.

According to Samson, the perpetrators of this violence seized his phone and laptop and posted alleged blasphemous content on a counterfeit Facebook page they had created for the express purpose of trapping him. Subsequently an FIR (‘First Information Report’) was registered and he was indicted pursuant to various sections of the Pakistani Penal Code (PCC) including, inter alia, sections 298 and 295C (the most pernicious section as it carries a mandatory death sentence. It is worth noting that this is the very same section that famous blasphemy victim Asia Bibi was convicted under).

Samson currently awaits trial and he languishes in squalid conditions in Lahore District Jail. He is detained in a cell that is designed for a maximum capacity of one to two people; however, the cell often houses eight to twelve inmates. This overcrowding causes sanitation issues, mental health issues and prevents the inmates from achieving any restful sleep. Moreover, it is as if they have been herded into a tiny cell like animals awaiting a diabolical fate, by a system intent on dehumanising them. Furthermore, Samson is not receiving appropriate medical treatment for his diagnosed medical condition (kidney stones). His access to the necessary medication has been further curtailed by restrictions imposed since the Covid-19 pandemic outbreak.

Samson has applied without success for bail on multiple occasions. His attorneys recently applied to Pakistan’s Lahore High Court for bail, however, it was denied on June 8th, 2021. An appeal has been lodged with the Supreme Court as of July 8, 2021. Moreover, these long and protracted court processes cause anxiety and distress to Samson’s family who remain avid supporters of their brother. This has caused the family emotional, financial and physical hardship. Samson’s younger brother, Shakeel, relocated to the USA circa 2012 but he regularly visits Pakistan to provide support to his brother in prison.

Samson’s youngest brother Michael resides in Lahore and he has been subjected to continuous threats to his life and well-being. He was also physically attacked and his entire left side is paralysed. Despite these difficulties he regularly visits his brother in jail but this is neither easy nor always pragmatic in light of the aforesaid. For his physical protection he has been relocated numerous times into various safe rented houses and he constantly uses burner phones so that those who wish to harm him cannot trace him.

Samson’s horrendous ordeal harks at deep-seated issues in a country that has long held a reputation for persecution of its minorities. While Jinnah’s original vision for Pakistan (as encapsulated by the white line in the flag said to represent minorities) was for an inclusive Pakistan, this vision has, unfortunately, not been honoured. Christians are disproportionately affected by the blasphemy laws despite only comprising approximately 1.6 percent of the population. Christians have also suffered numerous violent attacks including: the attacks on St Joseph’s Colony, Gorja, Gujranwala, All Saints Church Bombing in Peshawar and the Lahore Bombings, among other innumerable atrocities. Despite the enactment of anti-slavery laws in 1992, many Christians are enslaved in the brick kilns of Pakistan in places like Kot Radha Kishan. Christians also face pervasive discrimination in employment and are often relegated to menial jobs.

It is worth contextualising this situation as it fits within International Law. It is worth noting that Article 18 of the UN Declaration on Human Rights articulates the right to freedom of religion as follows, “Everyone has the right to freedom of thought, conscience and religion; this is a right includes freedom to change his religion or belief, and freedom, either alone or in community with others and in public or private, to manifest his religion or belief in teaching, practice, worship, or observance.” In 2008, Pakistan ratified two primary instruments of IL the International Covenant on Civil and Political Rights (ICCPR) and the International Convenant on Economic, Social and Cultural Rights (ICECSR). Arguably, the repression that Pakistani Christians are subjected to and their pervasive persecution represents a derogation of Pakistan’s obligations pursuant to various International Law instruments (many of which it is now a signatory).

As the sole breadwinner of the family, Shakeel requests and appreciates any financial help, collected on a GofundMe account created by a British friend. Samson is not the only Christian on trial for alleged blasphemy, Shakeel is quick to point out that there are 26 other Christians whose names are printed on fliers by Shakeel (with their respective family’s consent) who are also languishing in jail awaiting trial for release or punishment.

With increasing frequency, blasphemy accusations involve content generated on social media including that derived from Whatsapp or Facebook posts such as in Samson’s case, designated as “Cyber Crimes” in Pakistan. Blasphemy allegations are notoriously difficult to overturn as Islamist groups pack the court room, threaten lawyers and incite violent mobs across the country to prevent or overturn blasphemy acquittals.

Moreover, Samson’s brother Shakeel Anjum (and Justice Upheld) would like to see an amelioration of the treatment of blasphemy victims in Pakistan. We would like to draw attention to the plight of those suffering under these Draconian provisions. Shakeel Anjum articulates his position as follows, “The blasphemy laws are misused against Christians and it constitutes a kind of Christian genocide. These laws are being used to settle personal grudges and enmity. I call on the international community to challenge these laws and support persecuted Christians.”