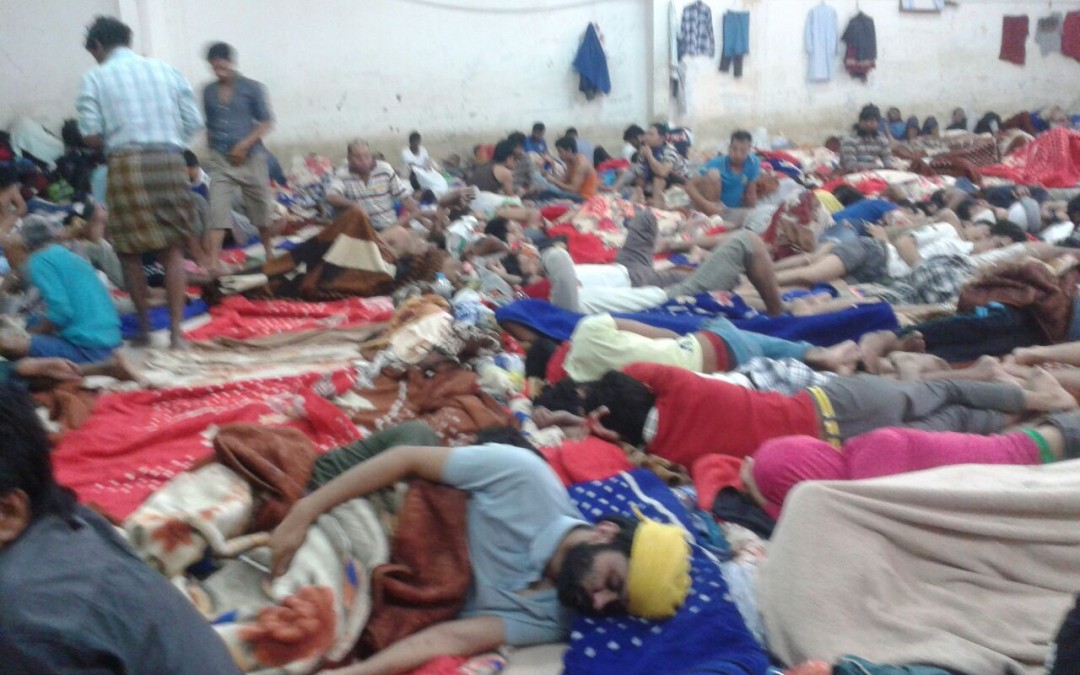 Indian work migrants who have escaped the abuse and torture at the hands of their Saudi employers often end up locked up at Shumaisy Deportation Centre in Riyadh or in a Saudi jail if the Saudi employer reports a serious (often malicious) allegation against the Indian employee to avenge the employee for running away.

If the migrant worker is facing criminal charges, then the duration of his stay in Saudi Arabia will depend upon outcome of his eventual trial which may take months or even years.

The conditions at Shumaisy Deportation Centre are appalling and inhumane. Over 400 Indian nationals are currently accommodated in a 40 by 40 ft. hall, without any bedding or seating provisions. The men sleep on the floor. There is no privacy and the conditions are unhygienic. The hall does not have any windows or access to fresh air. The air conditioning has resulted in the men developing respiratory problems. The men do not have access to medical services. No medical provision appears to exist. 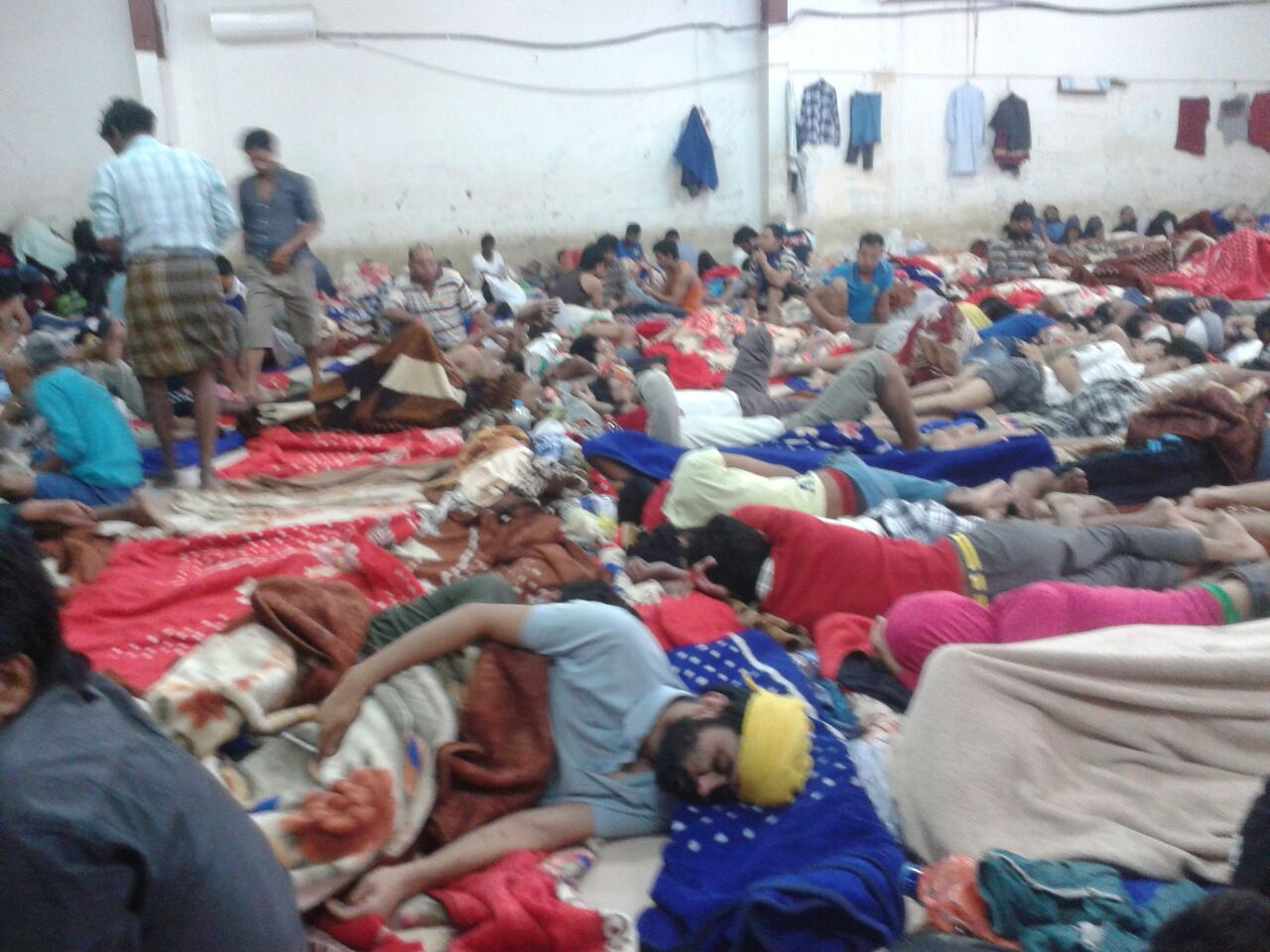 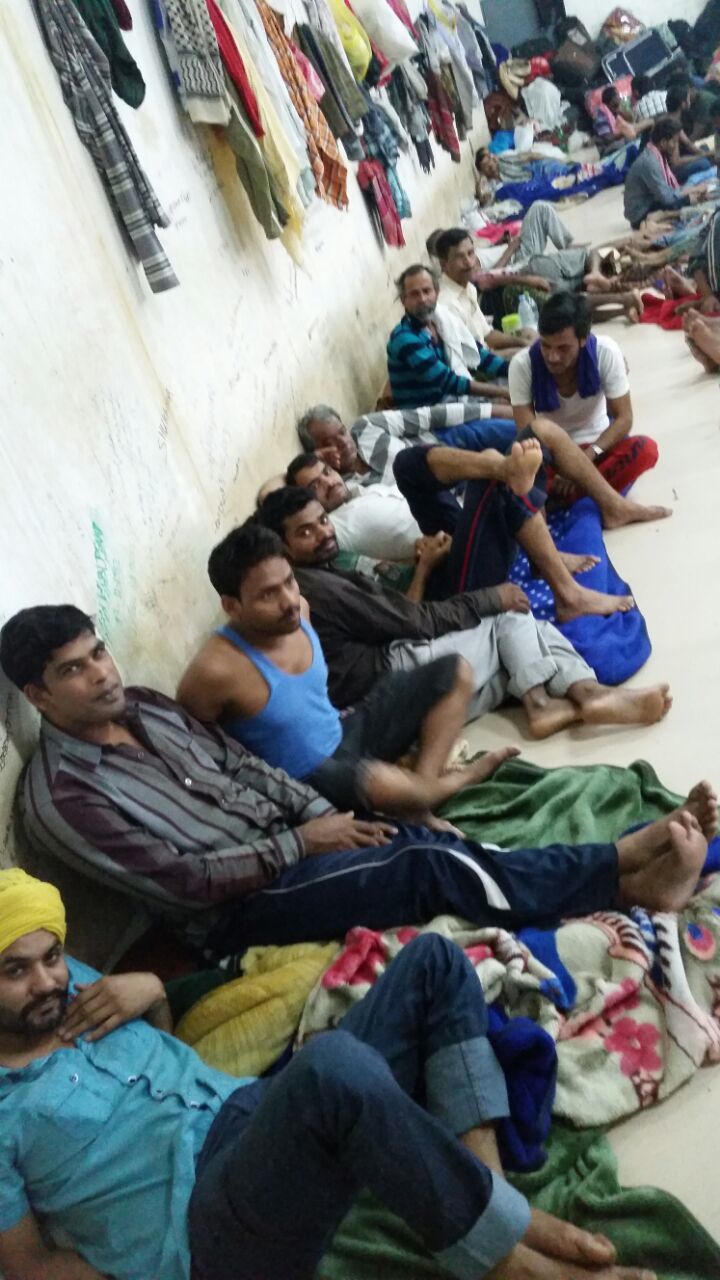 The deportation centre is run by the Saudi authorities. The detained work migrants are served with poor quality, often stale food. A typical meal will include what is described as ‘dal’ which is nothing more than water containing turmeric powder and black pepper served with dry, stale bread. 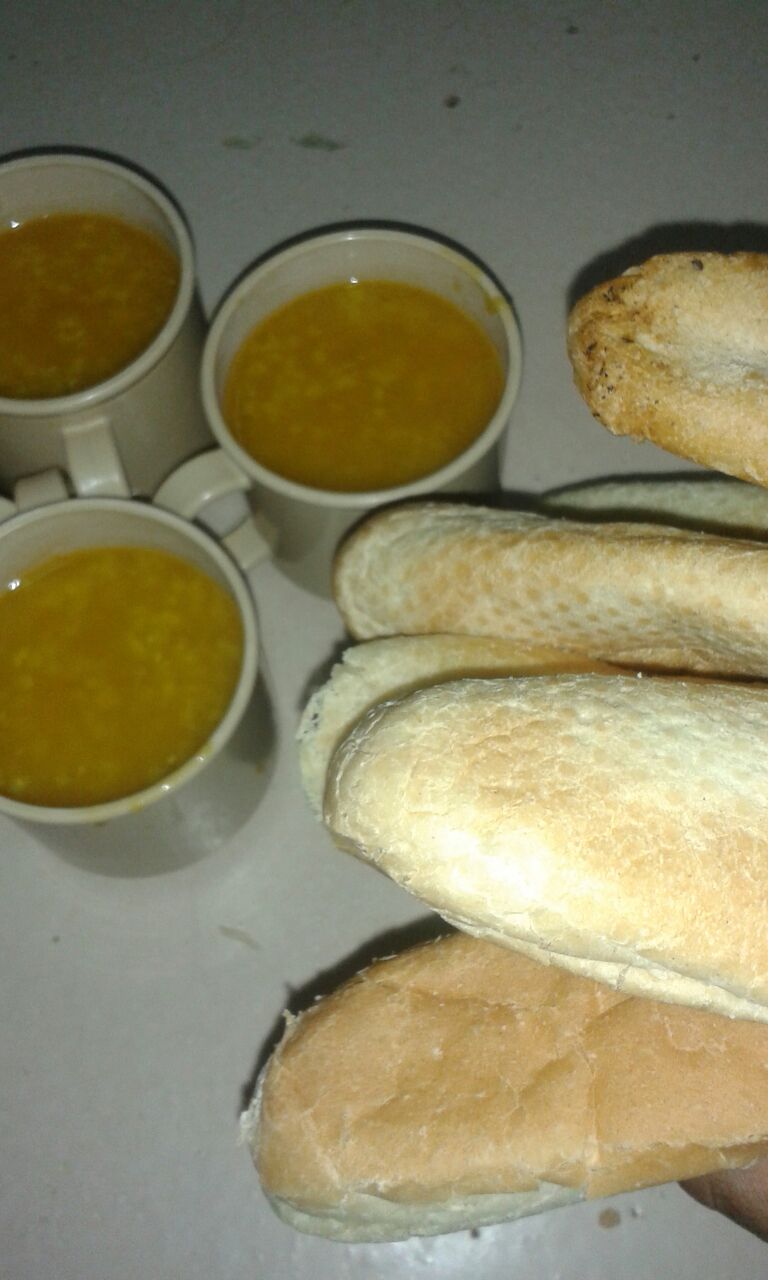 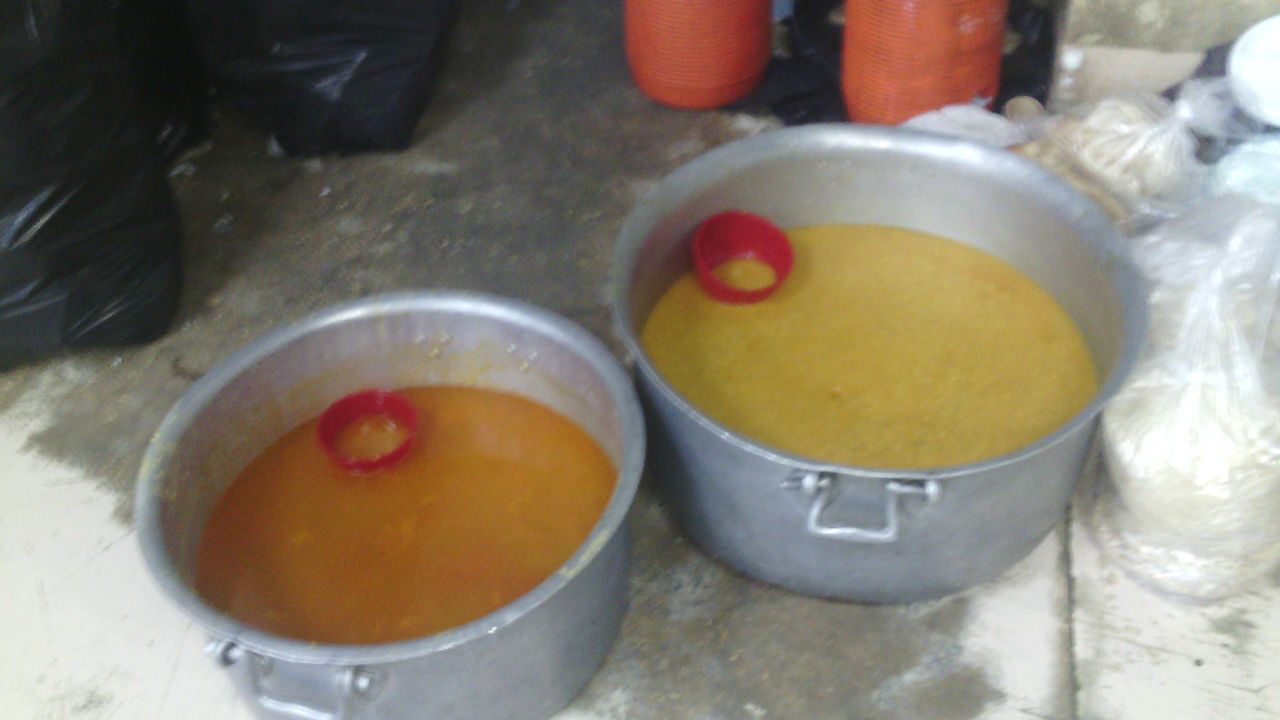 The men are provided with limited access to water to drink. They can buy water  from a Saudi supplier based in the deportation centre however, most of the migrant workers cannot afford to buy these basic provision. Many of the work migrants have had to flee from abuse and torture at short notice without their personal effects and without pay. Most of the men in the detention have not been paid for eight to nine months or not at all despite having worked for their Saudi employers for several months; often they have not been paid since commencement of their ‘employment’ in Saudi Arabia. Accordingly, they do not have the means to buy fresh safe drinking water or any decent food within the detention compound where a number of the migrants may spend upto a year before they are repatriated.

Access to drinking water, washing up facilities and general sanitation at the detention centre are appalling, inhumane which tantamount to torture. 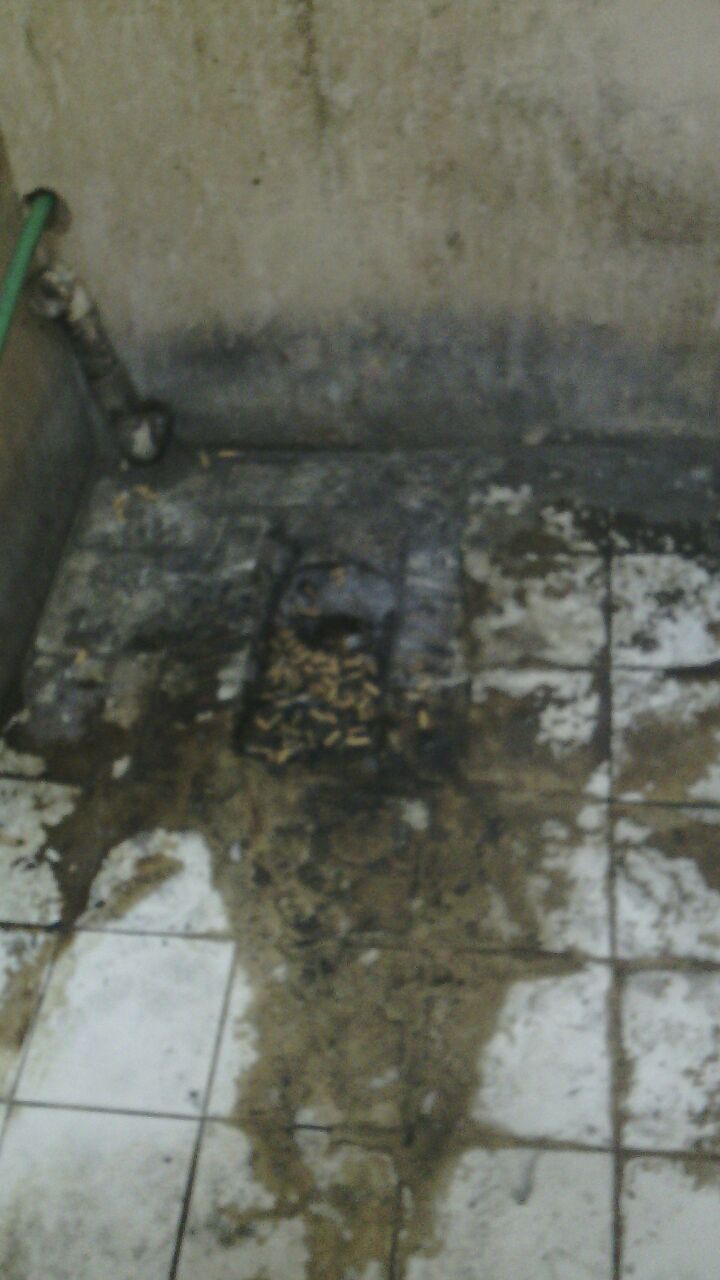 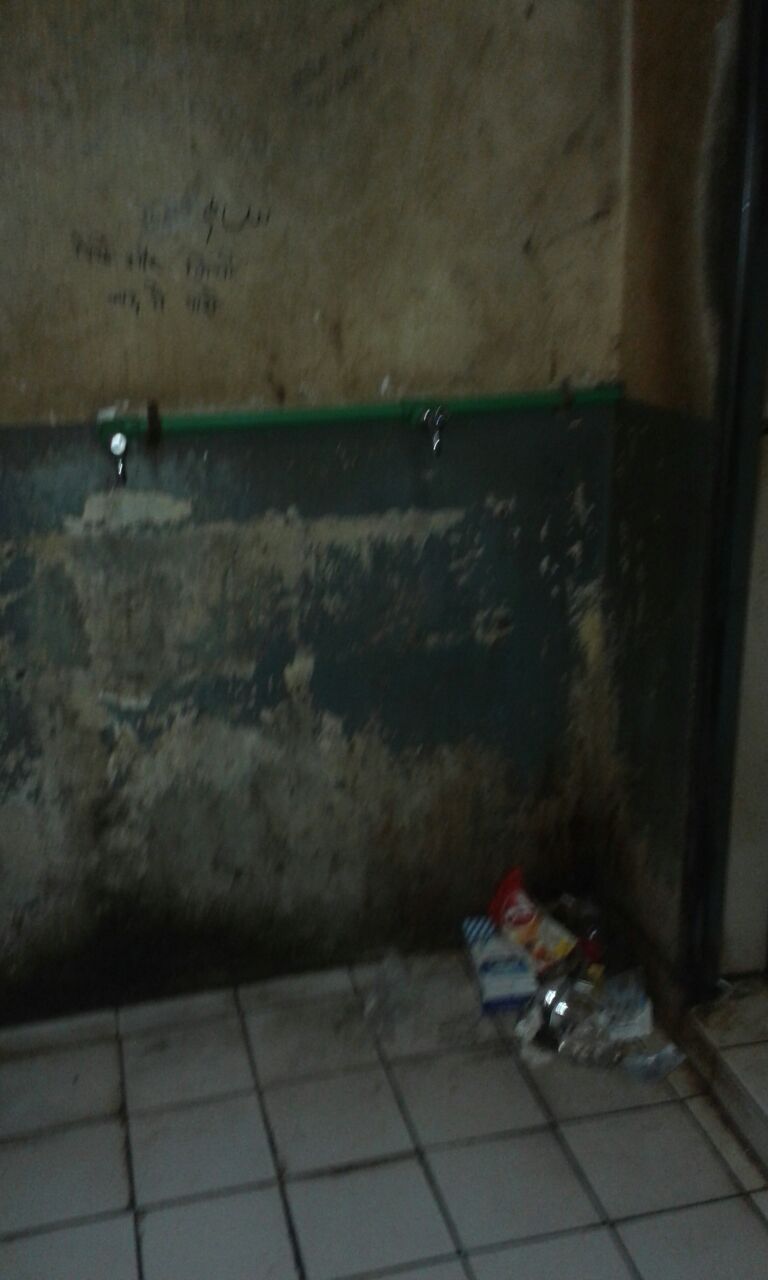 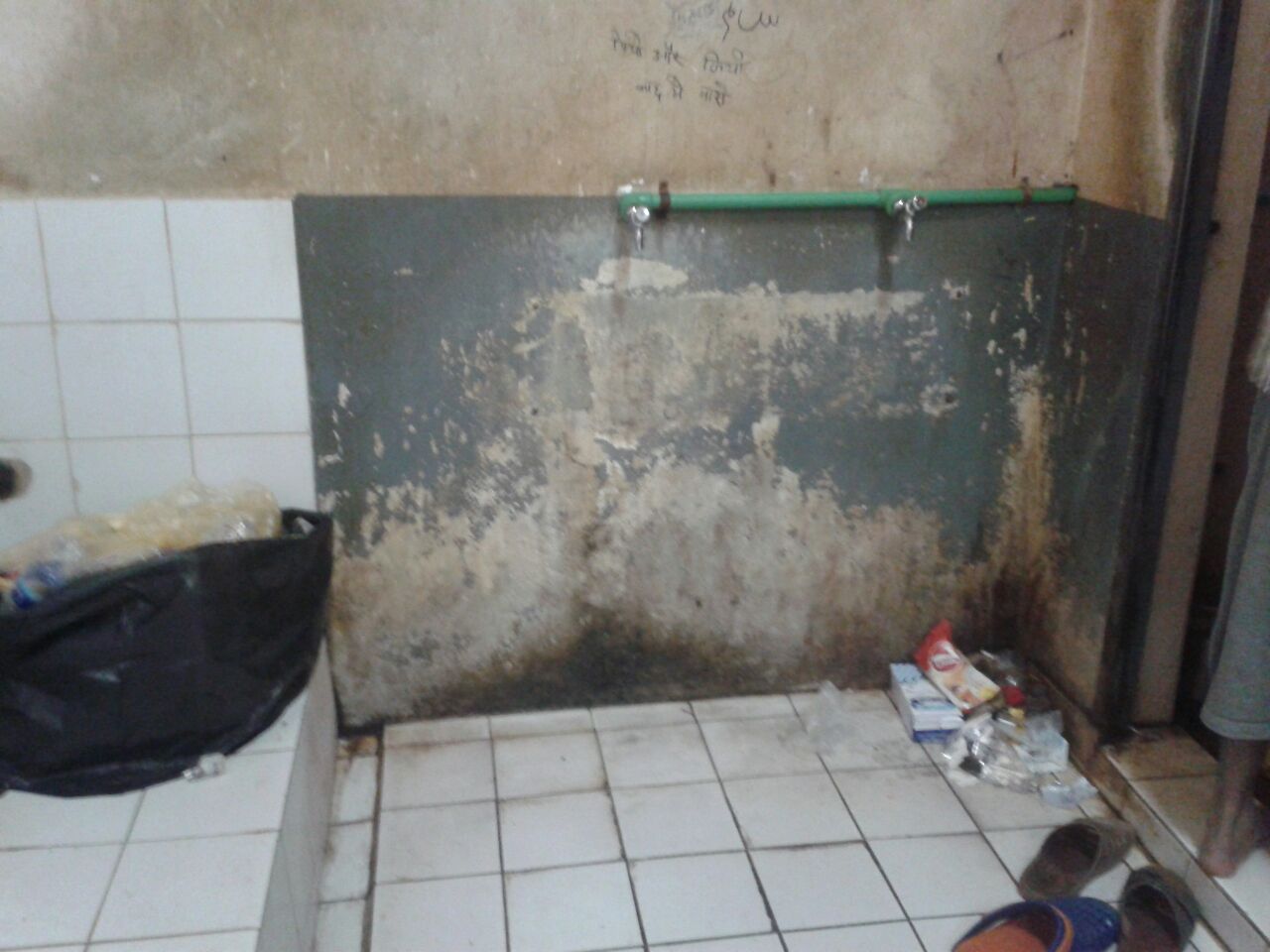 During the detention, the Saudi staff at the centre randomly phyisically and verbally attack the migrant workers. They seem to think it is acceptable to use the men as punch bags. This abusive, inhumane treatment is absolutely untenable and amounts to torture. The Indian authorities must confront and challenge the Saudi authorities in relation to this bullying.

The Indian authorities should process the repatriation of these men expeditiously and without delay and in the meantime, intervene to provide food,water as well medial assessment and treatment to their fellow nationals whilst they wait to be repatriated.

The Indian migrants have a raw deal from the outset of their plans to work abroad; their decision to move abroad is because of the lack of opportunities in their home State in India. There is wholesale failure by the authorities to ascertain as to why there is a mass exodus leaving the country and why they do not have the opportunities to work in their own country.

After the decision to work abroad, the work migrants then exploited  by the so called ‘recruitment agents’ who are unqualified and unregulated motivated by financial gain from securing a post for the work migrant. Unlike the practice elsewhere, in India the prospective employees are required to pay a few of several thousand rupees to the agent in order to secure a post abroad. The prospective migrant worker will often have to take out a loan and/or sell their valuable land in order to pay the agent.

These ‘agents’ do not and are not required to keep records , copies of the agency/employment contracts.

The migrants’ plight is further exacerbated  by their lack of understanding and investigation of the countries they are travelling to, not being aware of their rights and unable to recognise that their human rights are being breached. This is partly due to illiteracy and due to the desperate need to earn a decent living in return for a living wage which sadly is denied in their birth country.

Another typical example of abuse suffered by these migrant workers as explained by Balwinder Singh, one of the migrant works currently in the detention centre involves sponsoring an Indian natiional to work as a personal driver for a family in Saudi Arabia. However, when the migrant worker moves to Saudi Arabia, they are put under pressure and forced to drive trucks, lorries and HGVs – vehicles which they are not qualified, licensed or insured to drive and it is of course unlawful. Further, despite being initially employed as a personal driver, the migrant worker is expected to enter a life of servitude for the employer and his family.

Their attempts to report their concerns to the Indian Embassy are often dismissed and the migrants are berated for travelling abroad in the first place!

The lucky ones are those in the minority, who return to their families in India unharmed, with their dignity and self respect in tact.