Slavery – ‘Kafala’ – Enslavement of Migrant Workers in the Gulf States 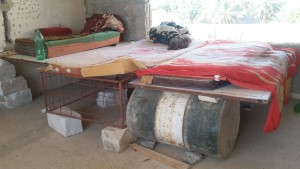 ‘Kafala’ is an Arabic word which means ‘sponsorship’. Kafala operates in the Gulf States and it is unique to these Middle Eastern States.
The ‘Kafala’ system allows nationals of the Gulf States to employ non Gulf nationals. It also enables the exploitation of foreign migrant workers as well as encouraging and facilitating forced labour.
The power is entirely in the hands of the employer/sponsor known as the ‘kafeel’ (sometimes spelt ‘Kafil’). The kafeel can be an individual or a company and has the authority and responsibility to issue employment visas and ‘iqamas’ (work permits).
The kafeel can dictate the conditions and terms of work, including the accommodation of the work migrant. In fact, the sole bargaining power rests in the hands of the kafeel to control the migrant workers, including legal power to control the work migrants.
It is the duty of the Kafeel to ensure that employment visas, work permits and related legal obligations are updated. However, this is dependent upon and maintained according to the nature of the each individual kafeel. There are many cases where the kafeel has unbeknown to the work migrant, failed to renew their work visas and permits which has resulted in the work migrant being forced to work without being paid for months. They are too frightened to leave the kafeel to report the matter to the Police since the Police will arrest and jail the work migrant for not having valid immigration documents. This often means months and even years of imprisonment.
The migrant worker is prohibited from changing jobs, resign and/or leave the country. If a migrant worker leaves his employment, the kafeel has the unilateral power to cancel the migrant worker’s right to remain in the country (that is cancel the work migrant’s residence which will render the migrant worker an illegal immigrant and most likely will result in his or her’s arrest and subsequent deportation.
The kafeel has further used his/her powerful position under the kafala system to seek revenge against the migrant worker where the work relationship has broken down, by making false and malicious accusations to the police against the work migrant. This inevitably leads to the arrest and imprisonment of the work migrant, disrupting and delaying his/her repatriation to his/her home country.
The subjugation of the Kafala system has resulted in migrant workers referring to kafeel as their ‘owners’.
The kafala system is archaic, medieval, brutal and is in absolute contradiction of international labour laws and conventions. It is a system that supports and actively encourages slavery.