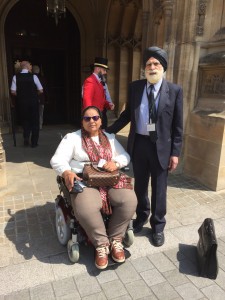 Following a meeting with Lord Indarjit Singh of Wimbledon on Thursday 9th of June 2016, at the House of Lords, Lord Indarjit Singh confirmed his support for ‘Justice Upheld’s’ campaign to ascertain the fate of the missing  Indian  POWs captured by Pakistan security forces during the !971 Indo-Pak War.

Lord Indarjit Singh was concerned to learn that two of the sisters, Mrs Rajwant Kaur, the sister of Flt. Lt. Gurdev Singh Rai and Mrs Niki Kumar the sister of Captain Kamal Bakshi, both British nationals have been struggling for over four decades to ascertain the fate of their kin without any support from the authorities. Whilst the British authorities are likewise concerned, Mr Philip Hammond, the Secretary of State for Foreign and Commonwealth Affairs maintains that the issue of the missing POWs is a matter between India and Pakistan.

The Member of Parliament for Ealing Southall Virendra Sharma, who also supports the two sisters, wrote to the leader of the Labour Party, Mr Jeremy Corbyn several months ago seeking his support and intervention; whilst Mr Sharma’s communication was acknowledged by Mr Corbyn’s office, we understand that a substantive response  from Mr Corbyn’s office in this matter continues to remain outstanding.

At ‘Justice Upheld’, we maintain that this is a humanitarian cause which transcends politics. The kin of the missing POWs need to know their fate before they can start the process of closure. These Prisoners of War afforded protection under the Geneva Convention, the international humanitarian law which specifically safeguards the detention of prisoners of war and detainees. Accordingly, pressure must be put on the Pakistani authorities to confirm what was the fate of the Indian POWs detained in their custody.