June 2021: Repeated reports appearing in the social media  of allegations of the heinous crimes currently taking place in West Bengal, India which include targeted assaults, lynching, murders and rapes of women and children, burning down the land, property and businesses belonging to those who dare to question.

Evidence suggests that the targeted attacks are politically motivated and include the weaponisation of rape and the threats thereof (Note the weblink report to ‘Khela in Bengal 2021’ below).

It is further alleged that there is a failure by both the Kolkata Police and the West Police to investigate the claims made by the victims, collect, preserve the evidence, arrest and charge the perpetrators. We are in receipt of disturbing information that not only are the Police failing to investigate the crimes, it is alleged that the Police are actively sharing the victim’s personal information with the perpetrators. If these claims are substantiated, then this amounts to gross misconduct and an abuse of Police Powers as well complicity by the State for failing to take action.

Failure by the State to intervene and act, reinforces that the acts are sanctioned by the State. These crimes undermine the Rule of Law as well as democracy. It would appear that victims in West Bengal are being denied their human rights to access and justice. People are fleeing to nearby states for safety and as a measure to safeguard their families. These incidents in West Bengal are unreported by the mainstream media and are not under the radar international human rights organisations.

West Bengal appears to be run as the personal fiefdom of the incumbent Chief Minister, Ms. Mamata Banerjee, who was recently re-elected to serve a third as Chief Minister of West Bengal. The Police in West Bengal operates as the personal army of the Chief Minister (as appears to be the  case across many States in India). The doctrine of the separation of powers requires that the principal institutions of the state, that is the executive, legislature and the judiciary should be clearly divided in order to safeguard the liberties of the citizens against the abuse of power.

It is apparent that a formal independent inquiry is necessary  to establish the causes and the nature of the violence and into the failings of the Police to investigate, arrest, charge and prosecute.

Under international law as well as under other legal systems, respect and the protection of human rights can only be guaranteed by the availability of effective judicial remedies.

Access to justice is a basic and a fundamental principle of the rule of law. Denying access to justice is to deny people their right to be heard, exercise the rights, challenge discrimination and seek accountability from decision makers.

What is the mandate of Law Enforcement?

Article 29 of the Universal Declaration of Human Rights:
“In the exercise of his rights and freedoms, everyone shall be subject only to such limitations as are determined by law solely for the purpose of securing due recognition and respect for the rights and freedoms of others and of meeting the just requirements of morality, public order and the general welfare in a democratic society.”

Hence the mandate for Police in modern democracies is:

1. To protect human rights;
2. To defend fundamental freedoms and
3. To maintain public order and the general welfare in a democratic society through policies and practices that are lawful, humane and disciplined.

What happens when Police Violate Human Rights?
1. Law enforcer becomes law breaker;
2. Human dignity is transgressed;
3. Erosion of crucial public confidence and support;
4. Exacerbation of civil unrest;
5. Hampering of effective prosecutions in court;
6. Isolation of police from the community;
7. Guilty parties go free – the innocent are punished;
8. Victims of crime are left without justice;
9. Removal of the “law” from “law enforcement”;
10. Police agencies are forced to be reactive rather than proactive;
11. International and media criticism and political pressure on Government and the Police.

What Happens When Police Uphold, Protect and Defend Human Rights?
1. Public confidence is built and community cooperation fostered;
2. A contribution is made to the peaceful resolution of conflicts and complaints;
3. Legal prosecutions are successful in court;
4. Police are seen as part of the community, performing a valuable social function;
5. The fair administration of justice is served and hence confidence in the system is enhanced;
6. An example is set for respect for the law by others in society;
7. Police are able to be closer to the community and therefore in a position to prevent and solve crimes through proactive policing;
8. Support is elicited from the media, from the international community and from political authorities;
9. Police bring honour to their uniform, their agency, and their government.

Click the following weblink to read the currently unverified report by ‘GIA’ a collective of human rights activists and academics: Khela in Bengal 2021 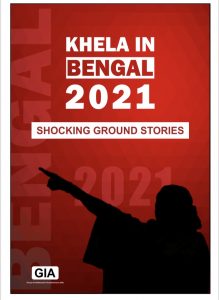