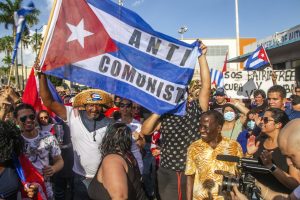 The economic and corruption problems that have plagued Cuba have finally come to a head.

Everyone seems to be blaming a different culprit, and the analysis and spin emanating from the mainstream media in the U.S.A. is not helping to get the true story out.

Parts of the mainstream media as well as President Joe Biden are falsely claiming that Cubans are rising up because there aren’t enough Covid 19 vaccines.

Democratic Socialist Bernie Sanders claims that the unrest is as a result of the U.S. embargo on the country. This is also false.

The Cuban protesters themselves and the more sensible parts of the media know the truth though. The real reason for this uprising followed by a vicious crackdown leaving numerous people dead, is Communism. Any other factors being used to explain these gross human rights abuses fail to realise that their root cause can all be traced back to the Big C.

The embargo exists because an unscrupulous, dishonest regime, with corruption flowing through its veins –  has for decades been performing typical Communist behaviour, and abusing the human rights of its people. The same authoritarian behaviour we see in Venezuela, North Korea and China.

Infact, anywhere that hard line left politics happens to be the norm, we see the same thing.

Gross human rights violations. Constant war mongering and sometimes imperialism (China again and in the past the Soviet Union.)

Imperialistic behaviour if there is a high concentration of power and if there is not, you’ll find a hyper nationalistic ethos, always combined with hard line attacks on human dignity.

Even before this fresh wave of protests, in fact since 2010, arbitrary arrests and detention of critics, activists and even those wishing to gather to discuss politics were at record levels. As many as 827 people per month were detained, questioned and sometimes beaten according to the Cuban Commission for Human Rights and National Reconciliation.

An independent human rights group that the government considers illegal.

Bravery In The Face Of Tyranny

In the fifteen years following the Cuban Revolution (Jul 1953 to Dec 1958) around 500,000 Cubans arrived in Miami, Florida. Most of them professionals and business people, they received Federal assistance and assimilation aid. By 2012, 1.2 million people of Cuban heritage resided in Greater Miami.

There is a reason that in the last election Florida voted for Donald Trump by a large margin. Broadly speaking, the Cuban people lean to the right politically.

Since January 7th, economic refugees, some wearing ‘Biden Harris’ t-shirts, are illegally crossing from Mexico into the U.S.A. They get food, clothing and shelter in a sanctuary city. In a move that beggars belief though, President Biden and Department for Homeland Security secretary Alejandro Mayorkas have stated that they will not allow Cuban people, who are fleeing genuine tyranny into the country. Why do you think that is?

Many are saying it is because those fleeing authoritarian, far left regimes will vote the opposite way once they are settled in a new country. So it is speculated that those crossing the southern U.S. border will be happy to join the Oppression Olympics of Joe Biden’s Democrat Party, where as Cubans are more likely to vote for the other guys.

Biden claims to stand with the Cuban people who are fighting for their basic human rights, but he has lifted the sanctions on fuel imports to Venezuela. Enabling the Venezuelan military to assist in the violent crackdown in Cuba against its citizens. A move the Cuban regime needs to happen as a large number of police officers are resigning and refusing to attack their own people.

That is how deep in the gutter U.S. politics is in 2021. Openly hypocritical and playing politics with the lives of helpless innocents in the hopes of securing more money and power in the future, with the current administration not even trying to bridge the gap between them and their political opposites.

Vermont Senator Bernie Sanders recently commie-splained out loud about apparently how great Fidel Castro was at leading the nation. He waxed lyrical about “universal healthcare” and “a good educational system”. It is true Cubans do “enjoy” universal healthcare, but the truth is it’s universally terrible.

The access to doctors and medicine is generally quite high, but the hospitals are crumbling and dilapidated, other essential equipment and materials are nowhere to be found. (Doctors are salaried as low as $40 per month, not quite enough to buy the t-shirts that Democratic senator Alexandria Ocasio Cortez hawks online).

The same is generally true of Venezuela. The people have access to healthcare but some of the medical professionals may or may not be properly trained, where in other cities the doctors are world class. It is like spinning a roulette wheel as to what sort of care one receives, and as you know with gambling, the house always wins.

A portion of the population have grown tired with the chronic problems of Communism and they have taken to the streets. The regime is shooting their own people in an effort to crush the dissent before it spreads. Orders from the top say anyone attending hospital with gunshot wounds must automatically be assumed to be an anti government protestor. And as such should be refused care and sent straight to jail.

These brave people would rather die fighting their government than die of starvation.

The U.S. embargo is only enabled by the fact that the country is hard line and full of human rights abuses. Left wing authoritarian regimes are inevitably abusive. There is no other way of enforcing a strongly centralised system. It starts with economic abuse and in turn leads to social abuse.

-The embargo is not responsible for Cubans being beaten and imprisoned for thinking differently, the dictatorship is;

-The embargo is not responsible for sentencing hundreds of political prisoners who have not committed any crime, the dictatorship is;

-The embargo is not responsible for people outside the island sending American dollars via Western Union to relatives in the country before the regime exchanged them for worthless Cuban convertible pesos, the dictatorship is;

-The embargo is not responsible for Cubans being paid in pesos while the regime sells everything in stores with American dollars, the dictatorship is;

-The embargo is not responsible for prohibiting fishermen from fishing, the dictatorship is;

-The embargo is not responsible for confiscating what farmers harvest, the dictatorship is;

-The embargo is not responsible for prohibiting Cubans from doing business on the island freely, the dictatorship is;

-The embargo is not responsible for destroying every sugar mill, textile factory, shoe store or canning factory, the dictatorship is.

The picture is truly grim for the average man and woman on the street. The GDP of the country has dropped by 11% over the last twelve months, shortages of food and medicine are rife,  there are rolling blackouts nationwide, the internet has been cut off to stop people from getting the truth out about what is happening there, and all while the country’s leaders have enough time on their hands to have themselves deemed ‘state sponsors of terror’.

These brave people need our help, and it is up to us to turn the spotlights of the world onto these enemies of human dignity and freedom.